Agricultural productivity development in semi-arid zones: LAUNCH OF A PROJECT OF MORE THAN 34 BILLION FCFA 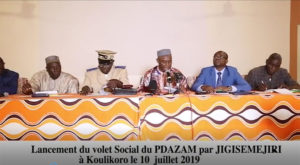 Funded at more than 34 billion CFA francs, the project for the development of agricultural productivity and diversification of the semi-arid zones of Mali (PDAZAM) was launched last Wednesday in Koulikoro, in the presence of the cabinet director of the governor Sékou Samaké and the project coordinator Mahmoud Ali Sako. The ceremony was an opportunity to inform and sensitize regional and local officials on the objectives, components and conditions of implementation of PDAZAM in the regions of Kayes and Koulikoro and to initiate the process of ownership by those responsible. regional and local

Project coordinator Mahmoud Ali Sako explained that PDAZAM is a vast project that is part of a strategic vision for rural and agricultural development in Mali.

“Climate change and increasing human pressure pose challenges for agriculture in the semi-arid tropical environment of Mali. The fight against growth and poverty reduction in Africa, and particularly in Mali, is facing challenges and improvements in agricultural productivity, infrastructure, social inclusion and household resilience to climate and environmental shocks. ” Mahmoud Ali Sako, adding that these constraints affect the living conditions of rural households and particularly those of poor households in arid zones.

According to the cabinet director of the governor Sékou Samaké, the PDAZAM aims to improve the livelihoods of dryland rural households in Mali to ensure their food security and offer opportunities for productivity improvement and resilience. He indicated that the project’s intervention area covers selected communes in 12 selected circles of Kayes, Koulikoro, Segou and Mopti. The targeted communes in the 2nd region are Guihoyo, Mansantola, Sagabala in the circle of Kolokani, Bancoumana, Bossofala, N’Tjiba (in the circle of Kati), Dilly, Nara, Ouagadou, Gueniébé (in the circle of Nara).

The project has three components: support for improving the productivity and resilience of beneficiary populations; productive infrastructure at the community level and institutional support, crisis management and project coordination.

The objective of Component 1 is to improve household resilience by providing combined interventions including cash transfers to poor and vulnerable households to increase consumption and cope with seasonal shocks among others. It builds on the experience of the “Jigisemejiri” project, in addition to building the social register and providing cash transfers. It also encourages behavioral change. Also among the 20,000 households that will be identified in the unified social register, 12,000 will receive as social cash transfer 15,000 FCFA per month with bi-monthly payments of 30,000 FCFA and or quarter of 45,000 FCFA.

Also, the productive monetary transfer of a unit amount of 250,000 Fcfa will be granted to 9,600 households identified among 12,000 households. The cabinet director Sékou Samaké invited the actors to take ownership of this project for its success in the 2nd region, before thanking the technical and financial partners, especially the World Bank for its varied and constant support.