Jigisemejiri “A Challenging Year With A 17.11% Completion Rate”

The social safety nets program in Mali through Jigisemejiri held its 15th session of the national steering committee at the Sheraton hotel on Thursday, November 26, 2020. The meeting was an opportunity to take stock of the achievements of September 30, 2020, estimated at 2 billion 659 million on an annual forecast estimated at 15 billion, i.e. an execution rate of 17.11% against an achievement of 99.4% for the year 2019.

Established by decree of the Prime Minister (No. 2013-195 / PM-RM of February 27, 2013), the “Jigisemejiri” social safety net program is a response from the World Bank to the request of the Malian government. The main objective of the program is to fight against extreme poverty through the establishment of cash transfers with the target of poor households suffering from food insecurity. It is precisely in order to take stock of the effectiveness of its sovereign missions that the Jigisemejiri program organized its 15th session of the national steering committee. It served as an opportunity to take stock of achievements as of September 30, 2020 and to review the draft 2021 program of activities and annual budget.
According to the president of the session, Mr. Soussourou Dembélé, Secretary General of the Ministry of Economy and Finance, this achievement rate is the worst result posted by the program since its creation in 2013. This was justified by several constraints encountered by the program during the year 2020. These include, among other things, the difficulties encountered during payments in the new localities in the center and north of the country due to delays in the recruitment of payment agencies. Regarding the accompanying measures, the situation was even more difficult because of procedural constraints that delayed the recruitment of NGOs in charge of the supervision and implementation of this sub-component. On the side of public works with high labor intensity (HIMO), 400 community works have still not been completed. The case of Income Generating Activities (IGA) followed, after the success of the first generation, 22,000 new IGAs were expected in 2020. The recruitment constraints of NGOs added to the Covid-19 restriction measures , slowed down the implementation of this operation.

Overall, the achievements of the Program during the first three quarters of the year 2020 were evaluated at 2 billion 659 million F CFA, on annual forecasts estimated at 15 billion F CFA, i.e. an execution rate of 17, 11%. During this session, the 2021 Annual work and budget program will be reviewed. “The year 2021 is a pivotal year. As a result, the rapid start of field operations is essential to make up for the delays in 2020, “Soussourou recalled. 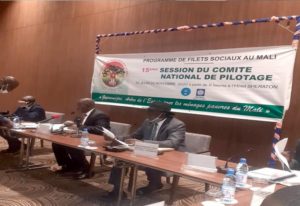 The Jigisemejiri program provides for additional funding 2 from the World Bank and the availability of resources from the Government Social Safety Net Project (PGFS), to make cash transfer payments in all regions of Mali. This will involve completing payments in the old municipalities on the one hand, and extending operations to the new municipalities, especially those in the center and north of the country. To do this, the Jigisemejiri Program provides for a budget of 19 billion 386 million F CFA in 2021 against 15 billion 545 million FCFA in 2020, an increase of 24.71%. A budget that includes almost all of the activities of the AWPB 2020. Somewhat ambitious, but the budget remains achievable if the constraints and restrictions noted in 2020 are lifted. To this, the implementation of the Government’s emergency cash transfer program has just been entrusted to the Jigisemejiri Social Safety Net Program, in order to relieve the poor and vulnerable populations, victims of the Covid-19. This presidential social assistance program aims to distribute benefits to more than one million beneficiaries in the 703 communes of Mali.